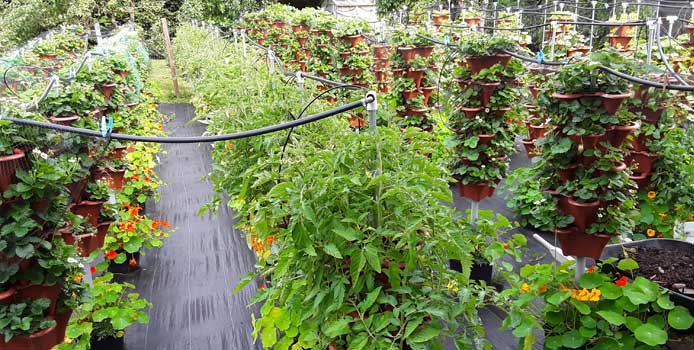 With a quasi, self-sufficient plan to produce as many veggies year around as possible, and others to store year around, here is how we began such an attempt, and why?

Originally, we started with a 50 pot, 200 plant vertical garden that was able to produce enough fresh veggies for summer and autumn, up until the last frost. We even were able to store and freeze others for quite some time too, such as tomatoes and jalapenos.

If we were residents in Texas, Southern California, or Florida, we could feast year round on the small setup and rarely ever put anything in the shopping cart from the produce aisle. However, in the pacific northwest where we reside, we don’t have the luxury of the long season.

That may sound like a lot of plants, but, being realistic about having tomatoes in February the next year to make a salsa requires some thinking ahead.

First of all, let’s start with spring. We grew hundreds of lettuce plants that were started indoors in February and transplanted in March. Why hundreds? They grow slow slow in cool spring that we needed huge numbers just to get enough to eat from April onward. As soon as the weather got warmer and they grew fast, we could cut down their numbers and replant with something else, like a tomato.

Meanwhile, we started all other annual vegetables indoors, about 3-6 weeks before frost date, depending on the specie. After that, the usual greenhouse treatment and transplant in May. From May-June, about all we could harvest are lettuce, chives and strawberries. Thus, our tomato supply is still coming from last’s years crop, which will run out right around the time the new ones are ripe.

Towards the end of July, cucumbers begin to ripen, tomatillos and tomatoes start to ripen, lettuce is still plentiful, strawberries continue supplying, beans are ripe and zuccini is ripe. Thus, there is easily enough veggies to eat until the frost arrives and it will improve when tomatoes ripen so we can indulge in tomato/cucumber salads like greek, and shirazi.

Essentially, we only hit these months for 3 months, mid-July to mid October. 25% is nice, but, for micro-farmers we see benefits and savings if we over-produce.

From a year round perspective, we dedicate enough plants for which we can preserve their output. Tomatoes, tomatillos, peppers(mainly Jalapeno and Chile de arbol), zuccini soup and strawberries are the main storage items from a vertical garden. We could include dried fruit from trees, but, we are focusing on an annual veggie garden grown in pots.

Our primary way to store such foods are freezing as it is quick and fast. Dehydration is used in some cases too prior to freezing. A good dehydrator is always a good investment.

For freezing tomatoes, some varieties are better than others. For example, early girl has a tough, thick skin which allows it to freeze into a ball while maintaining full shape. Making salsa with 3 month old frozen tomatoes may sound unpleasant for some, but, these tomatoes outperformed the fresh, store boughten ones in a landslide. They maintain their flavor.

Since strawberries find their way into a morning smoothie more often than not, our math shows we need about $1/day worth. Thus, we need about 2400 for freezing alone, nevermind the fresh ones we eat during season.

As fall comes around, we can partially shut down. But, we can be prepared and start Kale in June and lettuce in July for a late summer / fall transplant so we can continue eating fresh lettuce even through minor, freezing weather. If we have a greenhouse or coldframe, we could extend that too.

Typically, we should have a decent fresh supply of lettuce throughout November and Kale after that, perhaps even until the next year.

As far as fresh goes, Jan to the end of March is frozen only.

As we can see, we can roll with the seasons and grow for the big picture, instead of getting caught up in the small seasonal picture. We will eat better and save lots too, without mention of the other soul benefits of producing plants and caring for them.