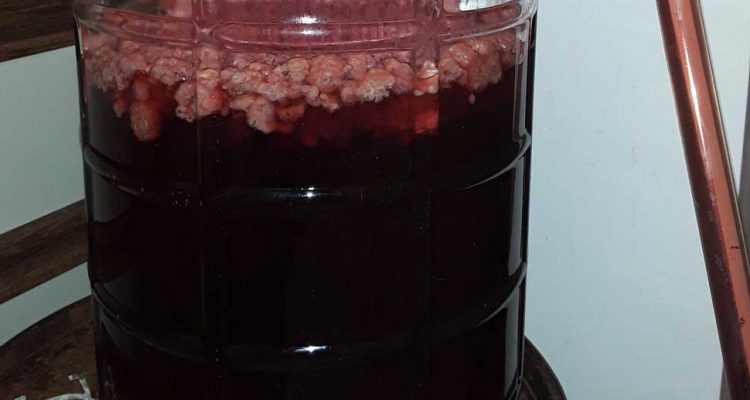 As a skeptic and having a general dislike for fruit beers(both commercial and craft brands) like raspberry, strawberry and blackberry, I figured the only way to the truth was through a split batch of homebrew.

However, two weeks later after soaking 3 gallons of beer in 3 lbs of berries, I was finally able to taste test before bottling and was not pleasantly surprised, but, rather amazed.

Okay, the previous words sum up the experiment. But, now, let’s look into the details, starting from the beginning.

The beer wort was added to the fermenting bucket along with the pitched yeast. Then, the usual 1-2 weeks of fermenting took place. Once fermenting ran its course, one batch was bottled and the other was moved into the secondary 3 gallon carboy.

Soon after, thawed, mashed, frozen berries were added to the carboy. Then, the airlock was inserted and back to a 2 week wait. Almost instantly, we could see the darkening of the brew that began to look like dark, red blood.

After the two weeks in a secondary, it was time to taste test and bottle the brew. So, the siphon was slipped into the mid section to remove the liquid, while being very careful not to clog it with the lower sludge and upper soaked berries.

This procedure is quite doable without a bunch of seeds and berry pieces clogging the siphon.

Now, with the liquid in the bucket, a taste test was taken, followed by the addition of dextrose and bottling.

When the taste test was taken, I was immediately caught in the middle thinking along the lines of a berry cider and a low percentage berry wine.

Almost right away afterwards, I was visualizing the finished, carbonated beer. Well, it seems like this was not going to be much of a beer at all, but, more of a hybrid cider with some beer undertones. It will be delicious.

While actually liking the odd cider in the hot months, this batch seemed special. It will be very enjoyable and not something that can be found in the local beer store.

As this concoction has bridged my liking of cider and beer, this growing season could see some split batches using other fruits and veggies; like apples, jalapenos, habanero peppers, blackberries and maybe even tomatoes.

Why The Rare Beer?

On the retail stage, a pound of berries can cost $3-7 or more. This can more than double the cost of the beer and adds time to the bottling procedure and clean up. In addition, the top berries soak up beer which lowers the batch quantity.

As a guess, breweries have these cost and labor factors in place, along with a lower market demand than fruit beer. Thus, again as a guess, this procedure in unlikely in their arsenal.

Making fruit beer allows homebrewers to add a mild or strong fruit flavor to their beer, allowing the creative edge to brew something catered to the tastebuds.

One thing that was noted during tasting was the quality of beer in itself. In other words, this could be an effective method to brew using beer kits, partial grain and malt extract, or all-grain.

Personally, I believe it is harder to distinguish the beer making method when berries are added in the secondary because of their heavy affect on the flavor.

In all honesty, the final product did not live up to expectations. Although I would not dump that batch, making berry beer did actually arrive at the desired sweetness. It was basically exactly as it was, just like adding berries in water and drinking. They would not be the desired sweetness unless sugar is added, much like an ‘agua fresca’.

So, the analysis changes how I would proceed with other fruits. Personally, they are best left for wine and cider making due to the nature of the sweet sugar drink.

From a beer making standpoint, split batches would be better off making the brew taste like desired commercial blends like Corona, Modelo, Dos Equis and Indio, but with unpasteurized, craftstyle.