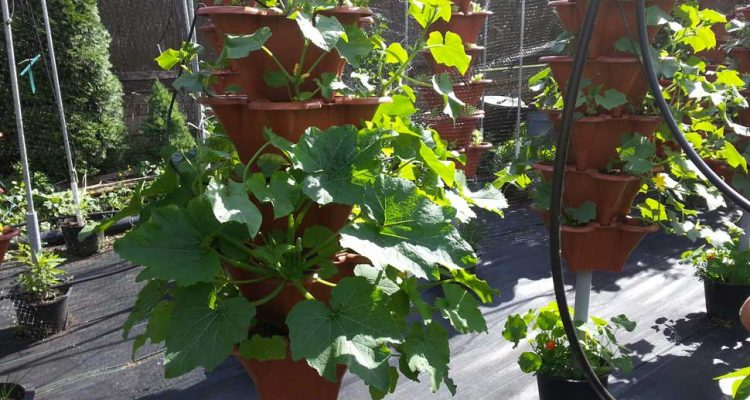 After three years growing cucumbers in two vertical gardens located around 100 miles apart, we would like to report on the process and the results.

For the first two years, we grew Stonewall cukes that flourished and tasted great. We were lucky that we started with this variety as recommended by mom who had a serious garden ever since I could remember; dating back to the 1970s.

However, last year we decided to give some others ago in the same vertical garden, namely Long English Cucumbers, pickling cukes and Marketmore 76.

How To Grow Cucumbers

All cucumbers were started under led lights about 2-3 weeks before the transplanting date. Cukes grow fast, therefore, not too much time is required before their roots fill up a 72-cell flat before getting rootbound.

When watering is required, we either fed them from the top, or placed the 72-cell flat in a tray filled with water, or water and nutrient after the two week mark. Once they soak from the bottom up, we moved them to another flat to dry excess water before putting them back on the shelf.

By keeping the 72-cell flat directly on the shelf without a tray underneath will help contain the roots. If there is a wet tray below, the roots will travel out the bottom hole and seek out the liquid. If the roots leave the 72-cell flat they are harder to transplant and there is a good risk they will run out of the desired liquid. They are better confined into the small cell.

After the cucumbers are done under the led lights, they are moved into a greenhouse or cold-frame for a week or so and get introduced to the sun. Normally, before the 4 week period they are transplanted into the system. However, cucumbers do a great job of handling an extra week or two in a 72-cell flat if there is a delay for any reason.

They all grew green and produced rather well all season long throughout fall, but, the Long English did seem to be a little unproductive by comparison and the Marketmore cukes were less appealing physically and taste-wise.

Thus, the Stonewall still remains on top of the list for a great cucumber to eat raw and a gem in Greek salads.