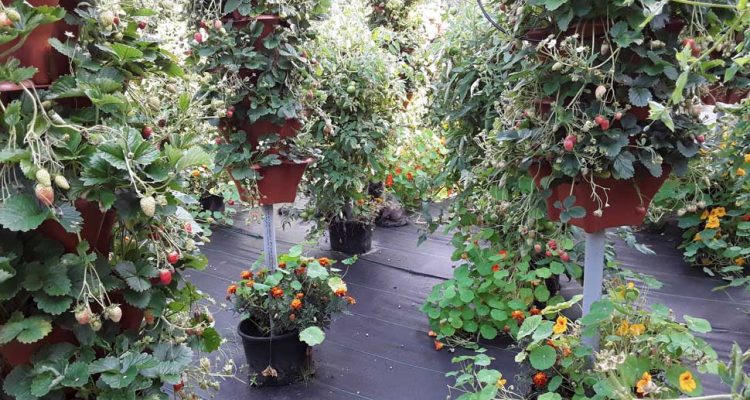 At 7 seven months old, the all of the plants fruited plentifully. However, it was not surpising that the expensive seeds of Elan, Frisan and Milan produced prettier flowers(some were pink) and bigger, tastier berries.

The main stock of all other berries were a variety called Fresca. They are a bit smaller, but are great frozen in smoothies.

Anyways, since the expensive seeds had germination rates of less than half, the price per viable seed was more than $1 each. Since we grew over 500 plants from seed, we only ended up with 20 of the expensive ones.

Luckily, once the runners came, we propagated as many of the costlier ones as possible, which came to over 100 plants. Since 2 and 3 year old strawberry plants are supposed to be most productive, the idea is to turn those 100 into 500 the next year and who knows from there.

To make the job of propagating strawberry runners easy in our mini hydroponic farm, we cut small 72-cell inserts and filled them with media like peat/perlite and made sure they were saturated with water.

After that, we put the runner in the cell and secured it inside the pot with wood fragments like a popsicle stick or large toothpick. Then, we just waited 2 weeks for the first sign of roots.

At this time, the runner was removed and they got transplanted to 3.5-inch containers for which they will be transplanted the next season into the terracotta colored pots.